The MPS Generator aspect deals with transforming code in a domain specific language (DSL) to code in a lower level of abstraction language. This language can then be interpreted or compiled into executable code, or transformed into code for other purposes, such as presentation. Examples:

First, it is important to understand that in MPS transformations there are 3 different artifacts involved:

In the case of MPS, the output model consists of nodes of concepts of a Java like MPS language, called Base Language. The build-in functionality of MPS takes care of transforming these nodes to Java code in the form of text.

In the subsequent paragraphs, several transformation statements will be explained.

With a Loop macro, a collection of input nodes is run through. For each iteration of the loop, the output language code that is within the $LOOP$ brackets is repeated. The output language code can then be modified with other macros, such as a switch macro or a property macro. These macros are offered the input node of the iteration. They futher specify the generated code for each iteration. 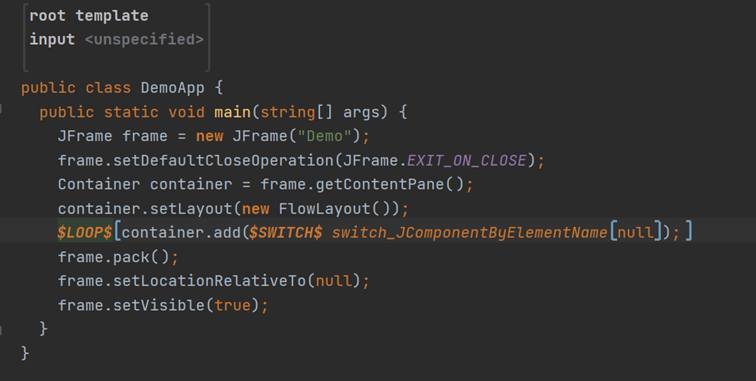 If you open the settings of the Loop macro with the inspector (set the cursor in $LOOP$, and open the inspector with ALT+2), you can enter a statement that determines the collection to be iterated. In the example below, the Loop macro iterates through all the XML document root elements of the input model:

The switch macro is offered a document input node per iteration (and switches depending on the name of the root element of the XML document).

Another example: A Loop macro is used to repeat an output language template (e.g. containing a string constant) for each item of a collection. The constant itself can then be changed with a property macro in a property of an item node. See video: https://www.youtube.com/watch?v=i-65_1E3vuI It also explains that node.index refers to the index of the current iteration.

I am a Model Driven Software Engineer at F1RE, since January 2022. Modelling has always been my passion. After 27 years specifying, designing, implementing and testing software, F1RE has given me the opportunity to be part of the next step in software development: model driven engineering. The development of domain specific languages gives customers and business experts the ability to create applications for their domain themselves. You can contact me at martijn@f1re.io.